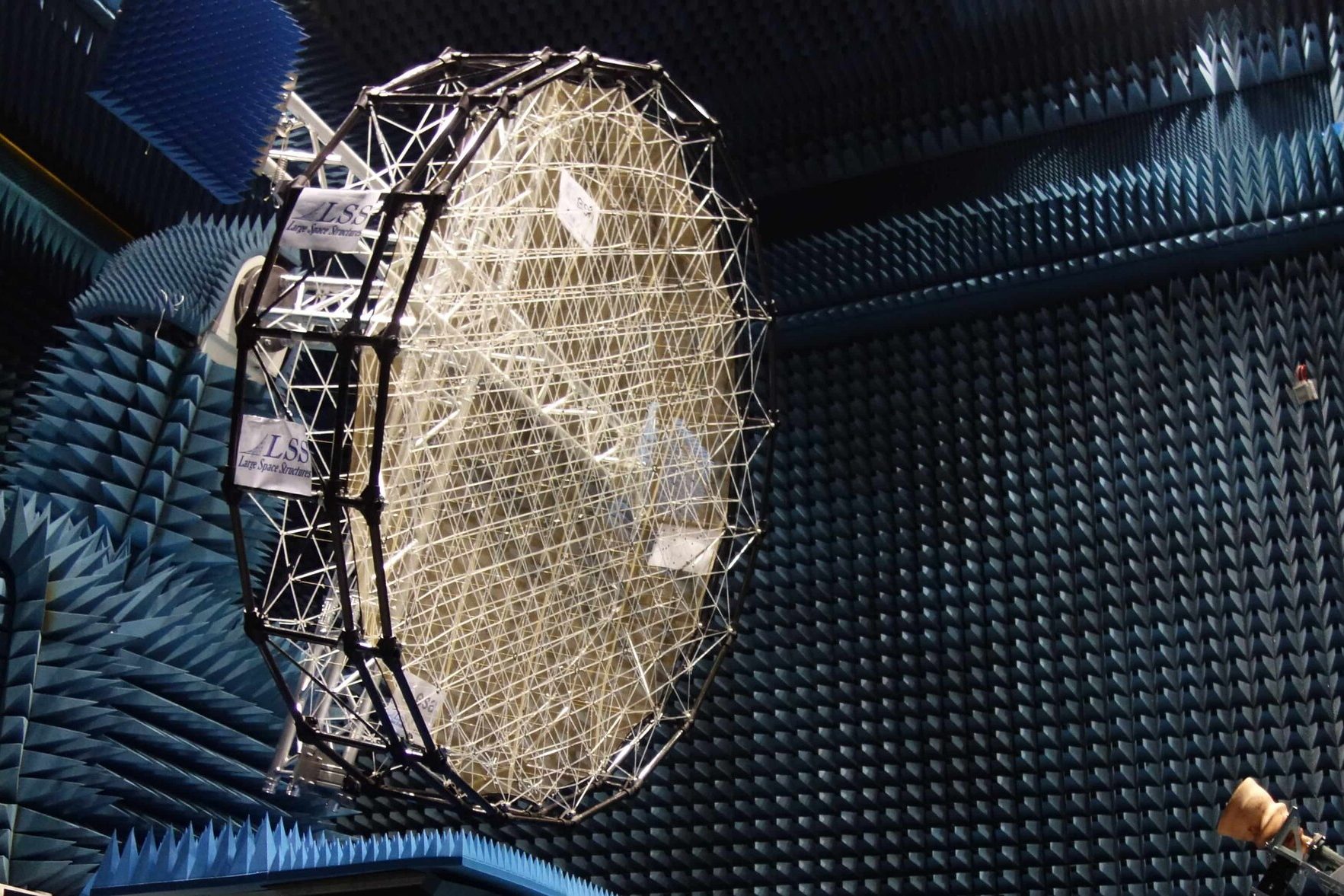 This news posting is written by esa.int

This prototype 2.6-m diameter metal-mesh antenna reflector represents a big step forward for the European space sector: versions can be manufactured to reproduce any surface pattern that antenna designers wish, something that was previously possible only with traditional solid antennas.

“This is really a first for Europe,” says ESA antenna engineer Jean-Christophe Angevain. “China and the US have also been working hard on similar shaped mesh reflector technology. It is needed so that sufficiently large antennas can be deployed in orbit, which would otherwise be too bulky to fit inside a launcher fairing, while also meeting required performance levels.”

ESA’s AMPER (Advanced techniques for mesh reflector with improved radiation pattern performance) project was performed with Large Space Structures GmbH in Germany as prime and TICRA in Denmark as subcontractor.

Antenna reflectors for satellites are often surprisingly ‘lumpy’ looking. Their basic paraboloid convex shape is distorted with additional peaks and valleys. These serve to contour the resulting radio frequency beam, typically to boost signal gain over target countries and minimise it beyond their borders.

“This tailored surface shaping is traditionally done with traditional metal or carbon fibre reinforced plastic composite reflectors,” adds Jean-Christophe. “The challenge was how to reproduce such shaping using a mesh reflector design. The obvious solution would have been a conventional tension truss double layer solution, with the mesh held together tautly on an alternating ‘push and ‘pull’ basis. A smart alternative solution has been proposed and followed by the team.”

Leri Datashvili, CEO and Chief Designer of Large Space Structures explains:  “The design of our shaped mesh reflector is based on tension members supported by a peripheral truss structure which enables decoupling of the shaped surface and the structure. Therefore, the design can be implemented for any size of reflector, for any frequencies ranging from P-band to Ka-band. Furthermore, either deployable or fixed reflector technology can be realised.”

“This 2.6-m ‘breadboard’ prototype proves the concept at C-band frequency, and the RF measurements have shown good correlation with radio-frequency and mechanical predictions” adds Jean-Christophe.

The AMPER project was supported through ESA’s Technology Development Element, with prototype testing carried out in ESA’s Hertz chamber at its ESTEC technical centre in the Netherlands. As a next step the AMPER team plan to produce a deployable version, aimed at Earth observation as well as telecommunications uses.